The North American B-25 Mitchell Bomber played a significant role during World War Two. It was a twin-engine medium attack bomber. It was one of America’s most famous airplanes of World War Two. The B-25 Mitchell bomber was the type used by Gen. Jimmy Doolittle for the Tokyo Raid on April 18, 1942. (See video below for actual film footage.)

Although the North American B-25 bomber was originally intended for level bombing from medium altitudes, it was used extensively in the Pacific Theater for bombing Japanese airfields and beach emplacements from treetop level, and for strafing and skip bombing enemy shipping. (See video below.)

No doubt, part of its heroic stature derives from its namesake, the outspoken Gen. Billy Mitchell who proved once and for all that bombers could destroy targets, and that wars would nevermore be decided only on land or sea.

Under the leadership of Lieutenant General George C. Kenney, B-25 airplanes of the Fifth and Thirteenth Air Forces devastated Japanese targets in the Southwest Pacific Theater (SWPA) from 1942 to 1945, and played a significant role in pushing the Japanese back to their home islands.

By the end of World War Two, North American Aviation had built a total of 9,816 B-25 bombers at its California and Kansas plants.

WWII Videos of B-25 Mitchell Bomber

Below are two World War II videos featuring the B-25 bomber. The first is a video of the start of the Doolittle Raid on Tokyo in WWII. The B-25 airplanes are shown taking off from the USS Hornet.

My father took over 80 photos of World War 2 airplanes and their nose art while he was in the South Pacific during WW2. Below are photos of B-25 Bombers he took while he was stationed in New Guinea. These WWII airplane photos are a small sample of photos he took. I put 420 of his original war pictures in a new book titled “Dad’s War Photos: Adventures in the South Pacific.”

“Mexican Spitfire” is an example of B-25 nose art photos Dad took.

Jack Voitier and his B-25 Mitchell Bomber “Hung Lo”

The rear view of a B-25 Mitchell bomber in WW2. 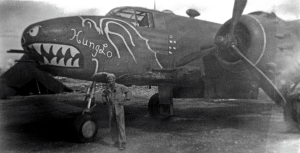 “Hung Lo,” the B-25 bomber piloted by my father’s friend from Opelousas, LA.

My father had a childhood friend by the name of Jack Voitier from Opelousas, LA, USA. Jack was the pilot of “Hung Lo,” which was a B-25 bomber airplane in WWII. His B-25 nose art had the “Bats Out of Hell” artwork on it. The details of how and where he got shot down is in my book. Please order my book today.

To get your copy of “Dad’s War Photos: Adventures in the South Pacific”:

This fascinating book has 420 photos and 21 maps to help you follow my father’s trek through the South Pacific during World War Two.

To get an autographed copy directly from the author, Neal Bertrand, click the “BUY NOW” button under the book cover in the sidebar of this page.

A-20 Havok
Scroll to top