Do you know anyone who was in the Army Air Force during WWII, or in the Air Force since WWII? Did you know you can have the military history of their battalion?

If it would not have been for the discovery of the complete military record of my father’s battalion during its three years during World War Two, this book, “Dad’s War Photos: Adventures in the South Pacific” would not have turned out as good as it did.

Perhaps you have a relative who was in WWII, or served in the military any time since then. Wouldn’t you like to know the drama, action and adventures they experienced?

When I started writing this book, all I had were pictures…but not all of them had captions. Some photos were mysterious, with no way to solve the mystery since my father passed away in 2000. I would have liked to have a daily diary, if only one existed. Then one day I was told about the Air Force Historical Research Agency by a WWII veteran. I contacted them immediately and discovered I could have the records I was hoping for… for only $60 on two CDs. This was a dream come true.

I have provided information about them below.

The Air Force Historical Research Agency is the repository for Air Force historical documents. The Agency’s collection, begun in Washington, DC, during World War II, moved in 1949 to Maxwell Air Force Base, the site of Air University, to provide research facilities for professional military education students, the faculty, visiting scholars, and the general public. It consists today of over 70,000,000 pages devoted to the history of the service, and represents the world’s largest and most valuable organized collection of documents on US military aviation.

More than 90% of the Agency’s pre-1955 holdings are declassified. The Agency’s collection is also recorded on 16mm microfilm, with microfilm copies deposited at the National Archives and Records Administration and the Air Force Historical Studies Office (AFHSO), Anacostia Naval Annex, Washington D.C. 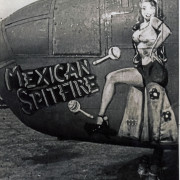 Landing Ship Tank, or LST, Part One
Scroll to top