Tag Archive for: how vehicles are loaded on an LST

You are here: Home / Blog / how vehicles are loaded on an LST 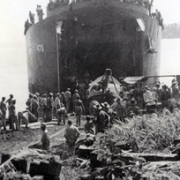 Landing Ship, Tank (LST) is the naval designation for vessels created during World War II to support amphibious operations by carrying vehicles, cargo, and landing troops directly onto an unimproved shore. About 1,000 LSTs were laid down in the United States during World War II for use by the Allies. END_OF_DOCUMENT_TOKEN_TO_BE_REPLACED