About Dad’s War Photos: Adventures in the South Pacific

Thus far, the World War II photo memories and story of Curtis Bertrand have remained private. Now these never-before-seen pictures, along with official battalion diary entries, are being made available to the public, bringing to life his battalion’s camaraderie and their heartbreaking and harrowing experiences.

The 863rd Engineer Aviation Battalion was stationed in three Australian cities during the summer of 1943: Sidney, Brisbane, and Townsville. Brisbane became the Pacific headquarters of U.S. General Douglas MacArthur, Supreme Allied Commander, after the Japanese forced him out of the Philippines in December 1941.

Each stop was necessary for the complex task of getting the numerous battalions organized, fully equipped, and putting the finishing touches on the engineering and battle planning strategy.

After that it was on to the New Guinea Campaign, including Dobodura and Saidor. New Guinea was key in defeating the Japanese bases as laid down by General MacArthur’s strategy called Operation Cartwheel. There are 81 photos depicting men building airstrips, camp life, native scenery, and more.

In a chapter on the Battle of Biak, the near death experiences of Curtis and his war buddies as their boat approached the island are graphically displayed. A photo taken of Curtis’s good friend Clifford G. Wynne, Jr. is included, just weeks before he died on Biak. Another 60 historical images are contained within this section.

Finally, on December 21, 1944, the battalion arrived in the Philippines. Eighty photos cover the destruction of the Battle of Manila and its reconstruction. Curtis’s medals and souvenirs are depicted, along with the Japanese rifle and bayonet he brought home with him.

The homecoming and post war life chapters give an intimate view of what many returning soldiers faced. For Curtis it was getting back to work on the farm, meeting his lovely wife, and trying to put bad memories aside.

Two appendices include extensive photo coverage of WWII aircraft nose art and the daily lives of natives in the South Pacific. 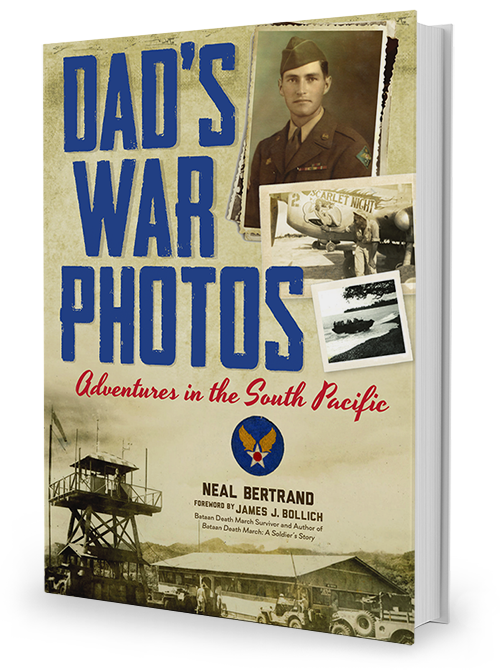 The author has annotated the book’s Table of Contents to give you a great overview of what’s included.

Images From
the Book

“The photographs provide a compelling story of a young man seeing strange people, exotic lands, death, weapons of war, and the camaraderie of American soldiers. This book is a testimony to a soldier who will not be forgotten.”

“Every page is a new discovery filled with teachable moments, stories of horror and heroism, discussions, lessons . . . a pictorial treasure trove of ideas for introspection, analysis, and consideration of the human condition.”