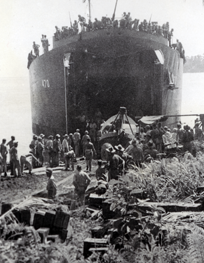 Landing Ship, Tank (LST) is the naval designation for vessels created during World War II to support amphibious operations by carrying vehicles, cargo, and landing troops directly onto an unimproved shore. About 1,000 LSTs were laid down in the United States during World War II for use by the Allies.

The overall length is 328 feet (100 m) with a 50-foot (15 m) beam and minimum draft of 3.8 feet (1.2 m). This scheme distributed the ship’s weight over a greater area, enabling her to ride higher in the water when in landing trim. The LST could carry a 2,100-ton (1,900 t) load of tanks and vehicles. The larger dimensions also permitted the designers to increase the width of the bow door opening and ramp from 12 to 14 feet (3.7 to 4.3 m) and thus accommodate most Allied vehicles. As the dimensions and weight of the LST increased, steel plating thickness increased from 0.25-inch (6.4 mm) to 0.375-inch (9.5 mm) on the deck and sides with 1-inch-thick plating under the bow. By January 1942, the first scale model of the LST had been built and was undergoing tests. For more info and photos see https://en.wikipedia.org/wiki/Landing_Ship,_Tank

Here is an image and technical diagram of how the decks of the ship are designed: 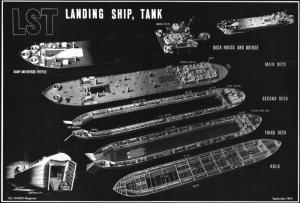 Click the link below to watch a WWII video showing how vehicles are stowed atop an LST: 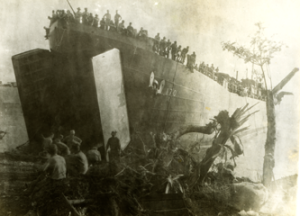 This photo appears on page 127 of my book. In this photo we have ship number 170, seen near the anchor. The doors are open and vehicles and troops are unloading upon arrival for the invasion of Saidor, New Guinea. They arrived on D-Day +6, which means six days after the invasion date of Jan. 2nd. The date of this photo is January 8, 1944. One of the first to debark was a bulldozer which cleared a path for the vehicles to unload. The evidence of this is seen in the pile of debris which some men are sitting on. Also barely visible on the top deck just above the open doors is a gun barrel belonging to an anti-aircraft gun.

This photo appears on page 126 of my book. In this photo we see LST 470. Vehicles and troops are loading up, preparing to leave the island of Biak in December of 1944. They will be going to the Philippine Islands. In the background are Owi and Auki Islands, about five miles away. Auki Island is where the sawmill had to be set up because there were no trees on Biak that did not have shrapnel in them due to the fierce fighting that had occurred. Shrapnel and saw blades are not a good combination. Owi Island was nicknamed the Island of Death because some of the troops got sick and died of a mysterious tropical disease by being on that island.

Below is the same photo cropped and enlarged.

Photos and videos of LSTs
Scroll to top