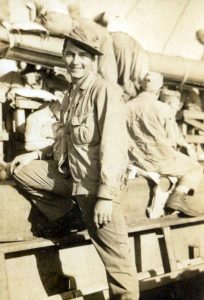 The war is over! Curtis Bertrand on the boat coming back home from Australia.

Did you ever have a relative or know of someone who fought in World War Two? Perhaps you envisioned what it was like for them to go to boot camp and get on a ship and sail off to war in the South Pacific.

My father was in the South Pacific in WWII. But I never had to imagine what he did or what he experienced. Because he brought his camera with him and took pictures every place he went for the three years he was in the Army Air Force. When the war ended, he returned home with over 600 photos. He put them in three photo albums and stored them in a cedar chest in our home.

I grew up with these photos. Occasionally, I would ask permission to look at them. “Daddy, can I look at your war pictures?” He always said “Yes.” I would put them on the kitchen table and start looking. If I had a question about a certain scene that my young mind could not understand, such as “Why is that woman sitting in the dirt?” he always answered my questions. “She’s sitting on the dirt ground because she’s having a baby.” That was weird. I thought storks brought babies to their moms in a hospital. That’s what happens when children are lied to.

Dad was with the 863rd Engineering Aviation Battalion. They used heavy machinery to create airstrips in the New Guinea wilderness, so the warplanes could refuel, load up with bombs and ammo and go attack the enemy…the Japs. There was no such thing as political correctness back then. The Japanese were called Japs or Nips, for Nipponese.

His battalion was a team, composed of four companies, namely, Company A, B, C, and Headquarters & Service, or H & S, which was dad’s company. The service he performed was to change the oil, grease and maintain the heavy equipment, such as bulldozers, graders, cranes, and packers. He told me he got that job because when the Army asked him what skills he had, he told them he was a farmer and had experience maintaining the farm tractor and family car. 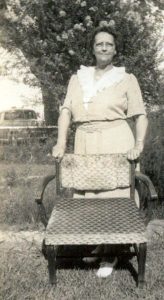 He left the farm in January of 1943, leaving his 59-year-old mother to do all his farm chores. She had to feed the chickens, ducks, geese, and hogs, among other things.

Greeting card from my dad Curtis Bertrand to his mom.

He went to boot camp in Fort Leonard Wood, Missouri. Then on to training camp in Washington, at Geiger Field which is near Spokane. Then by train to San Francisco to take the ship across the Pacific Ocean to Australia. Then on to New Guinea, Biak Island and the Philippine Islands, and back to San Francisco, then in December 1945, he returned home with all his photos to Mallet, Louisiana, about eight miles west of Opelousas on Hwy 190.

Thankfully, all his photos have been scanned, with 420 photos preserved in the book his son produced titled “Dad’s War Photos: Adventures in the South Pacific.” The book is in paperback, hardcover, and ebook. The ebook has links to over 100 vintage WWII videos that put you in the action.

The other D-Day hardly anyone knows about
Scroll to top