You are here: Home / Blog / WW2 in south Pacific 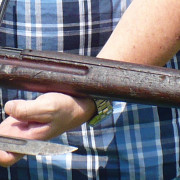 In March of 1945 during World War II, my father and his battalion were in Manila, Philippines. The Allies fought the Japanese there and killed many thousands. The Walled City, or Intramuros, was one of the places the enemy was fighting from. This is where this Japanese Arisaka Type 38 rifle and bayonet were found. You can read the whole story on page 151 of my book, Dad’s War Photos: Adventures in the South Pacific. END_OF_DOCUMENT_TOKEN_TO_BE_REPLACED