Blog
You are here: Home / Blog / Uncategorized / Photos and videos of LSTs

The Landing Ship, Tanks or LSTs are the ships that transported troops and machinery. See last week’s blog post for more information, photos and video.

My father and his battalion traveled aboard these ships, being transported to the various locations in the South Pacific. They were on these LSTs when they left Oro Bay, New Guinea and went to Saidor; from Saidor, New Guinea to Biak Island, and from Biak to Calicoan Island in Eastern Samar Philippines, then on to the battle of the Lingayen Gulf in Luzon, Philippines.

Today I am including some pictures which my father, Curtis Bertrand, took that I did not put in my book, “Dad’s War Photos: Adventures in the South Pacific.” He took over 600 photos in WWII with a “No. 1A Pocket Kodak Junior” fold-up camera. Kodak had stopped manufacturing it about 10 years before he left for war. Yes, some photos do not have a very good quality to start with, considering the age of the camera, lighting conditions, etc. But hey, at least we have actual photos to show the world and the descendants of soldiers who were in WWII. 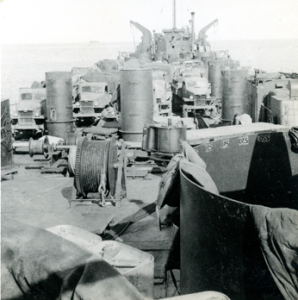 This is a view from the top deck of an LST looking to the rear of the ship where the captain commands the crew. Here you can see army vehicles stowed away. 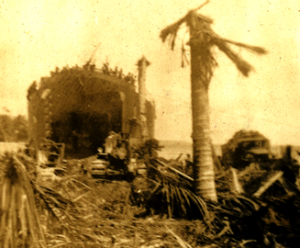 I suspect this is another photo of the LST #170 landing at Saidor, which I posted last week. There is a bulldozer in front of the ship clearing away trees and other debris,  and a truck on the right side of photo,  driving away from the beach.

This picture shows LST# 468 pulled up to the beach. Vehicles are visible on the top deck.

Hills are visible in the background. There was no wording on the back of this picture to give the location or date. However, seeing the background scenery, my best guess is that this is in Saidor, New Guinea.

I found some actual WWII videos of LSTs here. There is NO SOUND to any of these.

Here is another video of how vehicles are brought to the top deck:

U.S. troops aboard deck of LST (Landing Craft, Tank) underway at sea. Pontoon section launched from side of LST. Multiple pontoon sections lashed together would make a floating dock to unload the LST.

The other D-Day hardly anyone knows about