Blog
You are here: Home / Blog / WWII Airplanes / Photos of B-17 Bombers

Photos of B-17 Bombers

My father took two photos of Boeing B-17 bombers while in the South Pacific area of New Guinea during World War Two. This B-17 shown below was being examined by several men. This was one of dozens of pictures of bombers, fighters, and assorted WWII planes that are in my new book, Dad’s War Photos: Adventures in the South Pacific. The other B-17 he photographed has dozens of topless New Guinea women posing with the famous WWII airplane.

About the Boeing B-17 Flying Fortress

The Boeing B-17 Flying Fortress is a four-engine heavy bomber aircraft developed in the 1930s for the then-United States Army Air Corps (USAAC). The B-17 was primarily employed by the United States Army Air Forces (USAAF) in the daylight precision strategic bombing campaign of World War II against German industrial and military targets. The B-17 also participated to a lesser extent in the War in the Pacific where it conducted raids against Japanese shipping and airfields. The B-17G was the final version of the B-17, and in total 8,680 were built.

The B-17 in the Pacific Theater

Shown below is the B-17 Typhoon McGoon II. 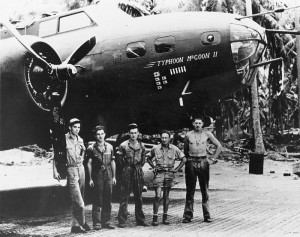 B-17s were used in early battles of the Pacific with little success, notably the Battle of Coral Sea and Battle of Midway. While there, the Fifth Air Force B-17s were tasked with disrupting the Japanese sea lanes. Air Corps doctrine dictated bombing runs from high altitude, but it was soon discovered that only one percent of their bombs hit targets. However, B-17s were operating at heights too great for most A6M Zero fighters to reach, and the B-17’s heavy gun armament was easily more than a match for lightly protected Japanese planes.

In mid-1942 Gen. Hap Arnold decided that the B-17 was inadequate for the kind of operations required in the Pacific and made plans to replace all of the B-17s in the theater with B-24s as soon as they became available. Although the conversion was not complete until mid-1943, B-17 combat operations in the Pacific theater came to an end after a little over a year.

In the Pacific, the planes earned a deadly reputation with the Japanese, who dubbed them “four-engine fighters.” The Fortresses were also legendary for their ability to stay in the air after taking brutal poundings. They sometimes limped back to their bases with large chunks of the fuselage shot off.

To get your copy of “Dad’s War Photos: Adventures in the South Pacific”:

This fascinating book has 420 photos and 21 maps to help you follow my father’s trek through the South Pacific during World War Two.

To get an autographed copy directly from the author, Neal Bertrand, click the “BUY NOW” button under the book cover in the sidebar of this page.

B-25 Mitchell Bomber in World War 2
Scroll to top