My father brought his camera with him to the South Pacific and took over 600 photos during his three years in WWII. I published over 4oo of them in “Dad’s War Photos: Adventures in the South Pacific.” One of my most prized photos is the one where he is standing next to ace pilot Major Edward Cragg’s P-38 named “Porky II” 11 days before it was shot down. This may be the last photo of this plane, taken on Dec. 15, 1943 in Dobodura, New Guinea. 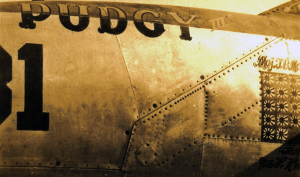 Named “fork-tailed devil” by the Luftwaffe and “two planes, one pilot” by the Japanese, the P-38 was used in a number of roles, including dive bombing, level bombing, ground-attack, photo reconnaissance missions, and extensively as a long-range escort fighter when equipped with drop tanks under its wings.

The P-38 Lightning was used most successfully in the Pacific Theater of Operations and the China-Burma-India Theater of Operations as the mount of America’s top aces, Richard Bong (40 victories) and Thomas McGuire (38 victories). In the South West Pacific theater, the P-38 Lightning was the primary long-range fighter of United States Army Air Forces until the appearance of large numbers of P-51D Mustangs toward the end of the war. The P-38 was unusually quiet for a fighter, the exhaust muffled by the turbo-superchargers. It was extremely forgiving, and could be mishandled in many ways, but the rate of roll was too slow for it to excel as a dogfighter. The P-38 was the only American fighter aircraft in production throughout American involvement in the war, from Pearl Harbor to Victory over Japan Day.

In the Pacific Theater

The P-38 Lightning was used most extensively and successfully in the Pacific theater, where it proved ideally suited, combining excellent performance with very long range. The P-38 was used in a variety of roles, especially escorting bombers at altitudes between 18-25,000 ft (5,500-7,600 m). The P-38 was credited with destroying more Japanese aircraft than any other USAAF fighter.

The P-38 Against Japanese Planes

P-38 Lightning being serviced in New Guinea during WWII

While the P-38 could not out-turn the A6M Zero and most other Japanese fighters, its superior speed coupled with a good rate of climb meant that it could utilize energy tactics, making multiple high-speed passes at its target. Also, its focused firepower was even more deadly to lightly armored Japanese warplanes than to the Germans’. The concentrated, parallel stream of bullets allowed aerial victory at much longer distances than fighters carrying wing guns. It is therefore ironic that Dick Bong, the United States’ highest-scoring World War II air ace (40 victories solely in P-38s), would fly directly at his targets to make sure he hit them (as he himself acknowledged his poor shooting ability), in some cases flying through the debris of his target (and on one occasion colliding with an enemy aircraft which was claimed as a “probable” victory). The twin Allison engines performed admirably in the Pacific.

On 2–4 March 1943, P-38s flew top cover for 5th Air Force and Australian bombers and attack-planes during the Battle of the Bismarck Sea, a crushing defeat for the Japanese. Two P-38 aces from the 39th Fighter Squadron were killed on the second day of the battle: Bob Faurot and Hoyt “Curley” Eason (a veteran with five victories who had trained hundreds of pilots, including Dick Bong). 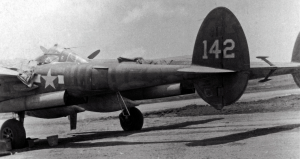 General George C. Kenney, commander of the USAAF Fifth Air Force operating in New Guinea, could not get enough P-38s, though since they were replacing serviceable but inadequate P-39s and P-40s, this might seem like guarded praise. Lightning pilots began to compete in racking up scores against Japanese aircraft. 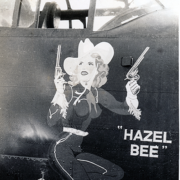