After I finished writing Dad’s War Photos, my sister, Karen, happened to find some WWII documents and artifacts our father brought home from the South Pacific. They had been placed in the bottom drawer of a filing cabinet and forgotten about.

There was a handmade toy airplane made out of a long rifle bullet casing. I recently learned that artifacts of this nature are called “trench art.” He also brought back an artillery shell casing that was made into an ashtray.

These items were crafted aboard ship coming back from the South Pacific. As a young boy, I remember my dad telling me that he and his fellow soldiers sat on the deck of the ship and used a tablespoon as a hammer to bang on the metal pieces to flatten them. They had plenty of idle time, since it would take at least two weeks to get back to San Francisco.

Also in this treasure trove was his “Enlisted Record and Report of Separation – Honorable Discharge.” This report revealed that at the end of his service he was age 25, had hazel eyes, was 5 foot 11 inches and weighed 165 pounds. He entered active service on Jan. 29, 1943. He was never injured or wounded. But I do suspect he got malaria while overseas. I have a picture of him looking very thin standing next to a nurse at a hospital in Manila. I could not prove it, so I didn’t include this photo in the book.

There were two documents of note that he was proud of. One was a “Certificate of Appreciation for War Service” from the Commanding General of the Army Air Forces, Hap Arnold. The other was a “Thank You” letter from President Harry Truman on White House stationery.

There was a list of names and addresses of about 100 fellow soldiers he served with. This list is now about 55 years old. My desire is to somehow track down the descendants of these soldiers to let them see for themselves what their ancestors went through in the war. This sounds like an impossible task, but we’ll see what happens.

If you have any “trench art” you’d like to share on this blog, please leave a comment or e-mail me (neal@cypresscovepublishing.com) and I’ll be in touch. 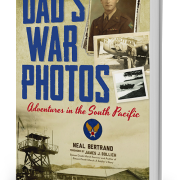 The other D-Day hardly anyone knows about